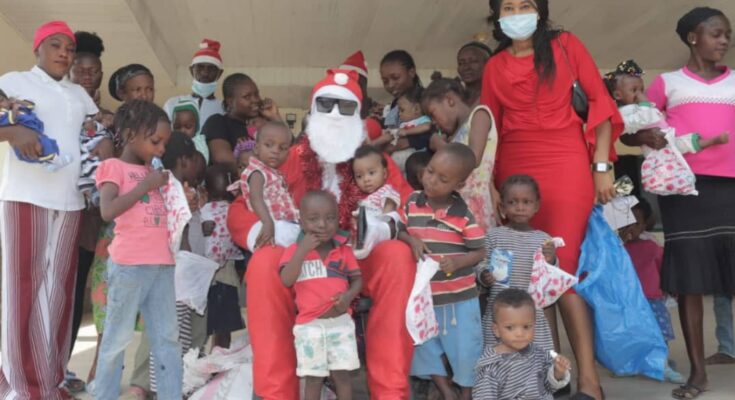 Kogi Doctor Celebrates With Children At Orphanage Homes In Lokoja

A Medical Doctor with the Federal Medical Centre Lokoja, Baoku Olusola has visited all the orphanage homes in lokoja Kogi State to celebrate Christmas with the children.

Dr. Baoku is a beneficiary of the grant by league of Friends, Prof Yemi Osinbajo (SAN), for his regular free medical outreaches to the masses.

The Doctor who was in full costumes of Santa Clause and his crew was at the orphanage homes laughing, dancing and distributing gifts to the kids.

The kids who are of different ages were filled with joy as they sang, and shouted for joy while the Program lasted.

The men and women who are managing the homes expressed their joy and happiness, described the gesture as first of its kind.

One of the women who spoke said ” we are very happy that the doctor choose the orphanage home to come and celebrate with us.

” That he decided to bring the things other people are enjoying in the festive season to us here speaks volumes, urged others to emulate his kind gestures, payed to God to bless Dr. Baoku for celebrating with them”.

The manager in charge of MOM ORPHANAGE home also said “we thank the organizer of this event. we are happy, the kids are happy and you can see how they are jumping up and down in excitement. We pray that God bless the organizer and be with him in jesus name.

Speaking to Journalists, Dr Baoku Olusola said the visit to the orphanage homes is the second phase of how he decided to spent the health Award Grant he won from the friends of Vice President Yemi Osinbajo, said the first phase was for free medical treatment and screening to over 2000 people of Karara village in Lokoja, Kogi State, said that the last phase which is the third phase will be carried out before the end of the year and will be dedicated to service to humanity.

He further reiterated that his philosophy is still that when God bless you, you increase your standard of giving and not of living.

He said he felt fulfilled after the event of visiting the less privilege, said he saw joy on the faces of the kids and their care givers.

Recall that the Medical Doctor with the Federal Medical Centre Lokoja, at the last weekend organised a free Medical Treatment for over 2000 patients in Karara, Lokoja Local Government Area of Kogi State.

The Medical Doctor at the Karara medical outreach said he was moved by the plight of the people in assessing Medical care at no cost.

He told Newsmen at the Outreach Programme that he decided to give the money to meet the health needs of rural dwellers.

In his words, ” Over the years I started “Health at Your Doorsteps” where we locate a Community, go there and treat them free of charge.”

Doctor Olusola further noted that “recently I became a beneficiary of Friends of Prof. I think it is an initiative of friends of Vice President Professor Yemi Osinbajo that they do every year. Somebody nominated me for the grant which I got last month or thereabout and I felt this is another opportunity for me to do what I use to do. So immediately I got the grant, I took the money then I contacted some of my friends, ten Doctors and twenty nurses and we located Karara which is one of the largest Communities in Kogi State for this Programme.”

He explained that people with different ailment such as malaria, Typhoid, high blood pressure, Diabetes, stomach ulcers etc where attended to and given drugs without paying a dime.

According to him, most of the beneficiaries are children, women and men.

While thanking the Vice President league of Friends for giving him the opportunity to reach out to the down trodden, Dr. Olusola appealed to well to do individuals to reach out to people no matter how small.

“I want to use the opportunity to tell the Vice President that what he gave me through his friends have touched many lives and I am fulfilled.”