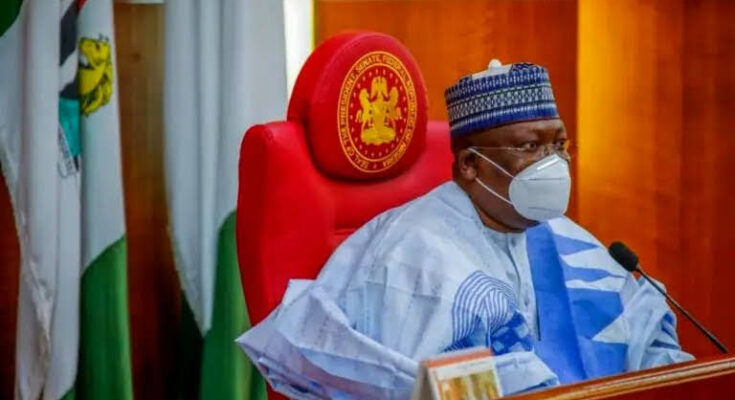 The President of the Senate, Senator Ahmad Lawan read on Tuesday, the letter of President Muhammadu Buhari withholding of assent to the 2021 Electoral Act Amendment bill.

President Buhari in the letter is withholding assent to the bill citing the imposition of direct primaries as approved by the National Assembly, the National Assembly for picking candidates by political parties in the amended Electoral Act as a violation of the spirit of democracy.

According to Buhari, with Direct primaries, there will be plethora of litigation from party members and stakeholders, just as he said that allowing the process would fuel corruption as well as encourage over monitorization.

In the letter read during plenary after the Senators came out from a closed-door session that was held from 10.42 to 11.42 am, President Buhari said that Direct Primaries would raise credibility issues as well as lead to undue interference, even as Buhari has asked the  Senate to quickly Consider 2021 Appropriation Virement of N13.588 trillion to fund infrastructure.

Buhari also said that he was withholding assent to the Bill based on Direct primaries because it would cause a huge financial burden on political parties, the Independent National Electoral Commission, INEC, the economy and security agencies, adding that the process is undemocratic.

The National Assembly had on Tuesday, 9th November 2021, passed the much anticipated Electoral Act Amendment Bill 2021 after both the Senate and the House of Representatives  deliberated extensively on the report of the Conference Committee on the bill.

The Senate had on that day, passed the harmonized version of the Electoral Act (Amendment) Bill, 2021.

The passage followed the consideration of the report of the Conference Committee of the Senate and House of Representatives on the bill.

In line with customary legislative procedures, the two chambers had in September set up  Conference Committees to reconcile disparity in the versions of the bill as passed by the Senate and the House of Representatives.

Consequently, the National Assembly had on November 19, 2021, transmitted the bill to President Buhari for assent in line with Section 58(4) of the 1999 Constitution that “Where a bill is presented to the President for assent, he shall within 30 days thereof signify that he assents or that he withholds assent.”