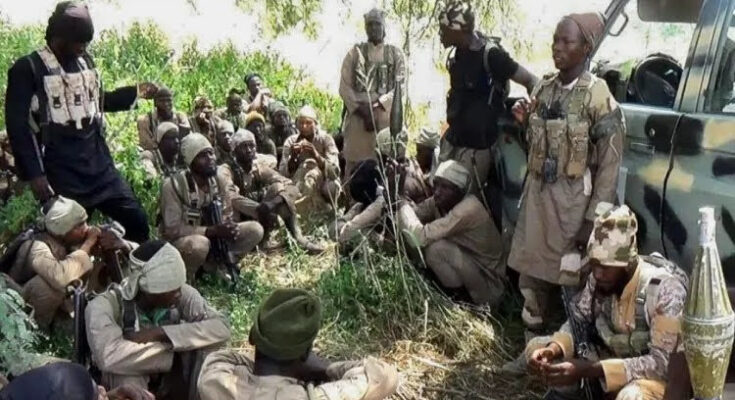 After sustained aerial bombardments and elimination of terrorists, surviving fighters of the Islamic State of West Africa Province (ISWAP) have buried no fewer than 77 terrorists killed in Marte axis, PRNigeria can authoritatively reports.

The terrorists were eliminated in coordinated airstrikes by the Nigerian military on three ISWAP camps, in the fringes of Lake Chad.

PRNigeria gathered that over a dozen guntrucks and several motorbikes were destroyed during the military offensives.

According to a top military intelligence source, who was involved in the operation, Super Tucano aircraft and other platforms were deployed for the sustained attacks on the ISWAP fighters, affiliated to ISIS.

“The successful Nigerian Air Force aerial strikes, under Operation Hadin Kai, with support from troops of the Multi-National Joint Fast Force (MNJTF), was launched on December 19, 2021, at three locations harbouring hundreds of ISWAP terrorists at Arinna Sorro and Arinna Ciki and Arinna Maimasalaci in Marte Local Government Area in Borno.

“The operation which was conducted after Intelligence, Surveillance and Reconnaissance (ISR) missions, targeted hundreds of surviving adversaries who escaped from a previous attack on Kusuma and Sigir, by the Nigerian Military.

“There was already a credible intelligence that a large number of the terrorists have moved to those camps where they are treating their wounded fighters. It was also revealed that the areas were also used by ISWAP to concealed vehicles, MRAPs and motorcycles under thick trees,” the source said.