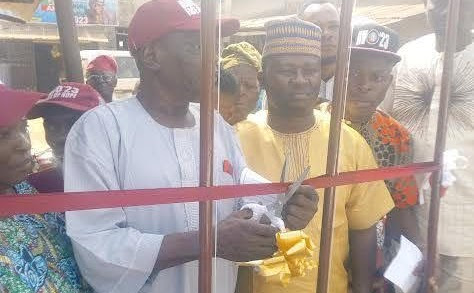 A chieftain of the All Progressives Congress (APC) and House of Representatives aspirant for Idanre/Ifedore federal constituency of Ondo State, Ambassador Adeleye Oluseye Victor, on Wednesday opened a campaign office for the presidential ambition of the national leader of the APC and former Governor of Lagos State, Asiwaju Bola Ahmed Tinubu.

Adeleye, who expressed confidence in the leadership of Tinubu, urged Nigerians to support the ex-governor in his bid to become President come 2023.

He said the ambition of Tinubu was driven by agitation by Nigerians to have purposeful leadership and ensure development in all strata of the nation’s economy.

Adeleye who is contesting the House of Representatives election pulled his weight behind the electoral reform bill currently before the National Assembly.

He said the direct primary election will provide an opportunity to elect the best person to represent the various political parties in any elective position.

He called on members of the National Assembly not to drop the bill but pursue it to a logical conclusion in the interest of all Nigerians.

Adeleye indicated that his campaign office, which is situated in the same place as that of Tinubu, will provide an opportunity for the people of his constituency and the state at large to make their desires known.

He called on the people of Idanre/Ifedore federal constituency to support him in his desire to represent them at the House of Representatives.