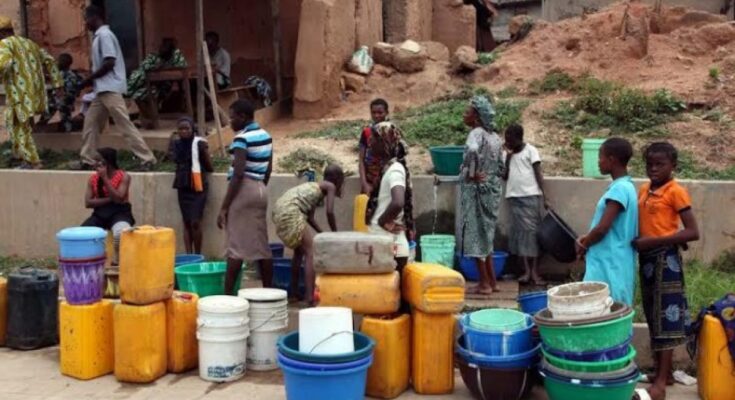 Residents of Lokoja and its environs are currently facing acute scarcity of water supply as business booms for water vendors.

Water, which is a necessity, for years has been a scarce commodity for residents of some areas in Lokoja, but recently, even areas that enjoyed epileptic water supply have joined the league.

For about a month, residents have been forced to buy water from water vendors popularly known as mai ruwa. The quantity of water that was sold at N400 is now being sold for N1,200.

Women and girls are seen late in the night with their water jerry cans and buckets looking for water from one borehole to the other.

Our correspondent who spoke to some residents of Lokoja about the situation on Friday was informed by a resident, known as Mr. Ismail, that for the past five years, he has not had water in his residence at the Angwan Kura area of the town, adding that they have resorted to buying water from the local water vendors.

“For the past five years, there hasn’t been water in my area. What we do is that we buy water from the mai ruwa guys and we do not even have hope that there will be water,” Ismail, lamented.

Another resident, Ibrahim Sulaiman, who lives in Karaworo said the scarcity in the area has lasted for three weeks saying that as much as the supply was epileptic, they were lucky to get supplied.

He said, “In my area, we usually get water every Sunday and it runs for a few hours before they take it. So what we do is that we will fetch water, fill up our containers and manage it until it is supplied again the next week.

“But for the past 3 weeks now, water hasn’t been supplied and we have resorted to buying water. The water vendors initially sold a truck of water that has 10 jerry cans for either N250 or N300. But now, they sell for at least N750”.

The water challenge in Madabo area of the Lokoja metropolis seems to be worse as Amina said she lost touch with the issue of water supply adding that they do not expect it because they know it will not be supplied.

Though there are accusations by residents that the Kogi State Water Board was selling water at the old waterworks to tankers and pure water manufacturing companies who in turn sell to the residents at exorbitant rates.

Our correspondent spoke to some of the local water vendors and they said the reason for the hike in prices was because they had to queue for longer periods and they have to pay more since the scarcity.

Dauda, who spoke in Hausa said “Sometimes we queue and even sleep in the queue waiting for it to get to our turn and when it gets to your turn, we do not pay the normal amount because even the owners of the boreholes have increased the price.”

At the time of filing this report, the Commissioner for Water Resources,
Hon. (Dr.) Abdulmumin Danga
did not pick calls.