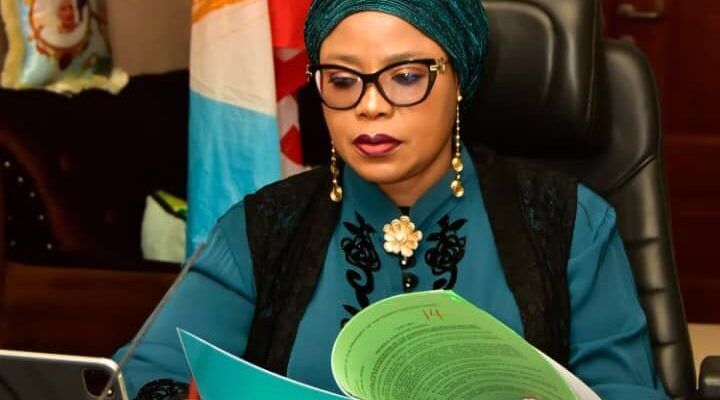 A group under the auspices of FCT Observers and Good Governance Association, has called out politicians who are hiding under a pressure and are bent on tarnishing the image Minister of State for Federal Capital Territory ( FCT ), Hajia Ramatu Tijani Aliyu, to stop forthwith.

The coordinator of the group, Mr Cletus Barnabas in a press statement expressed displeasure over the campaign of lies against the minister of state, discribing her as a women of peace who he said through out her tour of peace across the FCT area councils have championed peaceful co-existence and violent free Saturday February 12 election in the territory.

He noted that rather politicians concentrating on how to convince FCT residents to vote for their party or candidate during the poll, they have decided to make the campaign of lies against Dr Aliyu for their inordinate ambition and selfish interest.

The statement read: “ This is the first in the history of FCT that a serving minister for the state went out to campaign massively for unity and visited traditional rulers, various religious bodies and youths leader and encouraged them to maintain peaceful nature during and after the forthcoming elections.

“And some sponsored group are too busy talking about the minister of state and never talked about themselves. They are too busy throwing mud at Aliyu and never tell the people of FCT what they have in stock for better area councils. Interestingly, they have made the phenomenal history maker and peoples idol called Dr Aliyu, their politics of the day”.

“The statement also revealed that the FCT Minister of state will not relentl in her effort in supporting the security agencies to ensure a level playing ground among all political parties and ensuring the safety of FCT residents during and after the elections.

“It a well known fact that conducting a smooth election is not the responsibility of the FCTA alone but solely lies in hands of the Independent National Electoral Commission, and also those of the electorate working in tandem with all stakeholders, including security agencies, civil society groups, the mass media with community and religious leaders and organisations. So this group money making group should leave the minister of for FCT alone.

“We have recorded in a several occasions where she would say, “after the election, we must all return back to being brothers and sisters bound by the love for country and the desire to see her grow”

Barnabas therefore, warned politician and groups to stop using such cheap blackmail and political propaganda against the minister or FCT administration.

“I call on residents to close their ears on such baseless accusations and I urge contestants to use the Council polls to truly demonstrate the unity of all Nigerians, regardless of ethnic, religious or political affiliations” he said.