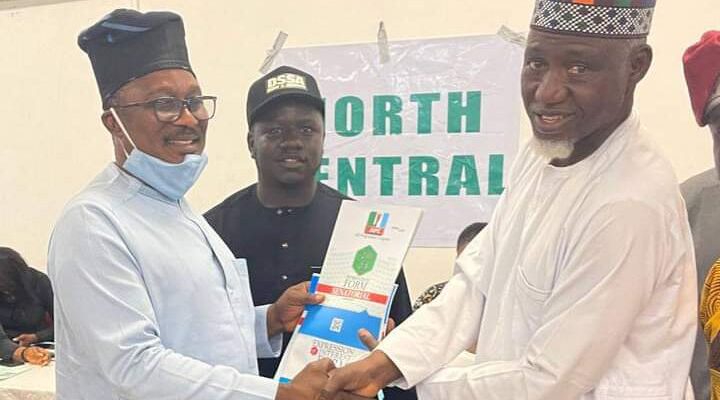 Chairman, Senate Committee on Aviation, Senator Smart Adeyemi, All Progressives Congress, APC, Kogi West, has picked his expression of interest and Nomination forms of his party at the sum of N20 million to contest for his fourth term bid in the Senate.

Senator Adeyemi’s picking of forms on Thursday came following months of intensive consultations and  endorsements across the seven Local Government Areas making up the Senatorial District.

The collection of forms by the incumbent Senator was amidst accolades from Kogi West leaders, women and youth groups as well as  party chieftains who accompanied him to the APC National Secretariat in Abuja.

ALSO READ THIS:  2023: It's Our Turn To Produce Next Senator - Lokoja/Kogi Federal Constituency APC Stakeholders

Speaking with Journalists shortly after collecting his expression of interest and nomination forms, Adeyemi  said, “I am here today on the strength of the wishes of Kogi West people. The collective resolve of Kogi West is that I return to the Senate to impact on more lives. and continue to attract Federal presence in Lokoja; Kogi; Kabba-Bunu; Ijumu; Mopa-Muro; Yegba East and West LGAs.

According to him, “I have rendered selfless service in the past years. I have exceeded the expectations of my people and I am passionate to do more.That is why I am  seeking this next term because of the larger picture that is ahead for the entire people of Kogi West, Kogi State and the North Central.

”Legislative business is based on experience and our party –  The All Progressive Congress (APC) needs experienced legislators who can defend the interest of the party in order to consolidate on previous achievements of our party.”

On the extent of support back home, the Kogi West Senator said, “the level and quantum of my developmental strides in Kogi West has already done the needed campaign to deliver the expected victory in the 2023 general election.

“What I owe my constituents is deep appreciation. I am grateful to my constituents for their level of support and  outpouring of love towards me. History is in the making and Kogi West will be the winner at the end with a tsunami dimension of infrastructural development. I count on their continuous support until victory is achieved for the common good and to the glory of God”