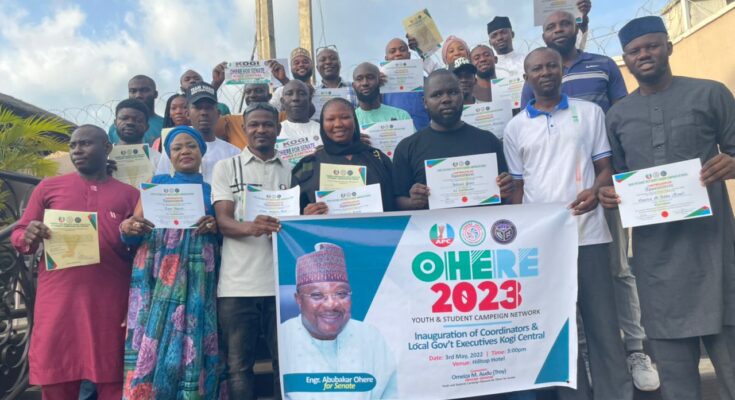 Okene (Kogi), May 4, 2022
Some youths in Kogi Central under the umbrella of Ohere Youth and Students Campaign Network (OYSCN), on Tuesday inaugurated its Central Committee and Local Government Coordinators, at Okene, Kogi State.

The Youths’ groups comprised of 17 different interest groups under the umbrella of the Party, APC met in Okene to discuss about how to unite and deliver Engr Abubakar Ohere, the Kogi State Commissioner For Works, as the next Senator to represent the good people of Kogi Central Senatorial District in the 2023 general elections.

The group resolved to work in harmony and canvass for votes for Engr. Ohere’s emergence as the APC’s senatorial candidate for Kogi Central in the forthcoming party primaries for the National Assembly election.

Comrade Omeiza Audu and Comrade Mohammed Eneji were inaugurated as The Director General and the General Secretary respectively.

In his inaugural speech, the DG, Comrade Omeiza Audu (Troy), charged all members to work together in unison towards ensuring that the Aspirant, Engr Ohere is propelled by the group to attain his enviable height.

He urged them to make sure they work hard to see to his emergence as the APC flagbearer for Kogi Central, and as member of the next Senate of the Federal Republic of Nigeria.