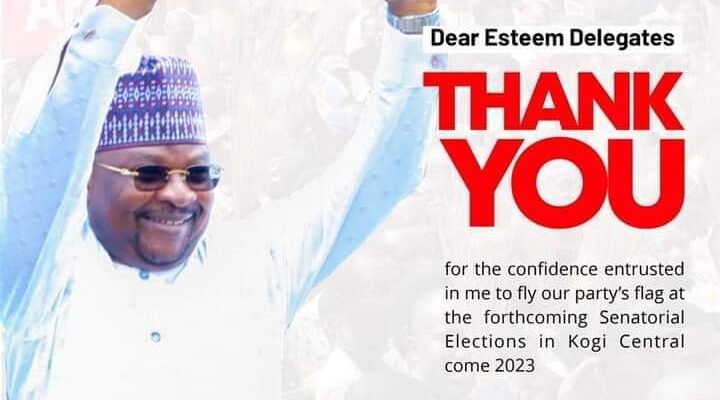 A Veteran Journalist, Jide Otitoju has described the victory of Engr Abubakar Ohere as the flagbearer of the APC for Kogi Central Senatorial District as not a surprise.

Otitoju made the disclosure at yesterday’s TVC program, Journalists Hangout, said it has only pleased God to elevate him by picking the Senate ticket of the APC in Kogi Central Senatorial District.

The veteran Journalist described Engr. Abubakar Ohere as one of the very few stars in the administration of Gov. Yahaya Bello’s administration, commended him for his outstanding performances within the short time he served as Commissioner for Works and Housing.

The Journalist said within a very short period of Gov. Yahaya Bello’s second term, praised him for the overhead bridge ongoing in Lokoja and the massive infrastructure development ongoing in the Confluence University of Science and Technology, Osara.

Otitoju explained that presently about 23 buildings including the Senate building is ongoing in CUSTECH, also praised him for the ongoing Lokoja and Okene township roads that are all ongoing.

He added that under Engr. Ohere, the Okene and Lokoja Specialists as well as the Teaching Hospitals in Anyigba are nearing delivery, said the Commissioner would be missed greatly in the Gov. Bello’s administration with a capable replacement very hard to come by.

ALSO READ THIS:  I’m Ready To Reconcile With Ganduje – Kwankwaso

The Journalist praised Engr. Ohere for making the second term achievements of the present administration possible, wondered how Gov. Bello will cope now that Engr. Ohere is going to the Senate, said he was a capable hand, who handled all the assignments under his ministry with honesty.

While pointing out that he is not surprised that Engr Abubakar Ohere won the Senate ticket in Kogi Central, said having his replacement in the Works and Housing Ministry would be a very tough task.

The outstanding performances of the Works and Housing Commissioner, Jide Otitoju explained has led to the ramping up of projects by the present administration, said his good works has pleased God to elevate him.

The Journalist noted that his desire for the Gov. Bello’s administration to live lasting legacies are what drives the former Works and Housing Commissioner to make the desired impact, expressed optimism that with the contending forces that is not too strong in Kogi Central Senatorial District, Engr. Abubakar Ohere would emerge victorious at the general election.