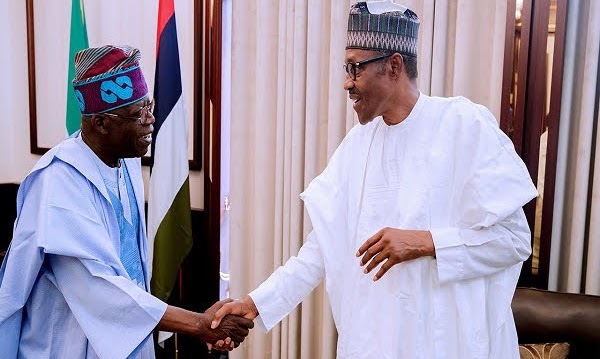 National Leader of the ruling All Progressives Congress (APC), Asiwaju Bola Tinubu, on Monday declared that he had informed President Muhammadu Buhari of his presidential ambition.

Asiwaju Tinubu disclosed this while addressing State House Correspondents after a closed-door meeting with Buhari in his office at the Presidential Villa in Abuja.

The APC stalwart however said he was yet to publicly disclose his ambition as he was still in consultations with various interests across the country.

He refused to be drawn into the question of a potential race for the APC ticket between him and Vice President Yemi Osinbajo whose support groups have been mobilising for his candidacy.

Tinubu asserted that his ambition to be President has been a life-long ambition, noting that what he did in Lagos in his time as Governor, he has the capacity to do in the entire country.

On Osinbajo’s potential ambition, the APC National Leader maintained that he would not discuss any individual.

Asked why he would not remain a kingmaker rather than being the king, he said there is nothing that stops a kingmaker from becoming the king unless he has committed murder.