Home Politics 2023 Presidency: Atiku Under Fire For Kicking Against Zoning 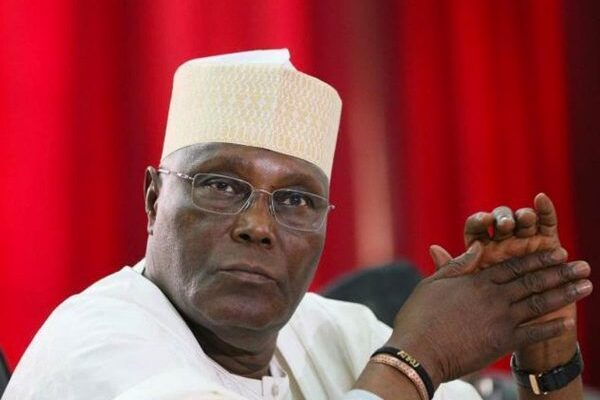 2023 Presidency: Atiku Under Fire For Kicking Against Zoning

Atiku Abubakar has come under fire for faulting the call on the Peoples Democratic Party (PDP) to zone its presidential ticket to a particular region of the country.

The Vice-President while speaking at a meeting with members of a group, ‘Let’s Fix Nigeria’ who were on a solidarity visit at his residence in Abuja on Friday, said zoning was unconstitutional.

Reacting to the statement made by Atiku, the National President of Middle Belt Forum (MBF), Dr. Bitrus Pogu, told THISDAY that the former vice president was being driven by money and not ability.

He advised Atiku to be patriotic in his quest for power, adding that “he’s not more intelligent than everybody in this country.”

“If Atiku were not a rich man, would he have been clamouring for president? He’s just a Nigerian; he’s not more intelligent than everybody in this country. It’s his money that is driving him, rather than ability. Is he saying he’s the only one that has the intellect and capacity to rule this country? Does he have to be a president to be able to add value to governance in this country? There some individuals who think if they are not the one, nothing can happen in this country. But that is a lie; there are so many people out there.

“We are trying to save this country; the presidency is not about an individual, but about saving Nigeria,” Pogu said.

Pogu added that: “There are so many things that are not in the constitution that we practice for political stability in the country.

“For instance, the Peoples Democratic Party; a party Atiku joined in founding; a party that I can say that he’s one of the greatest beneficiaries has zoning in its constitution.”

Pogu recalled that in 2019, “we all felt that this government was not doing well for Nigeria, and we said Atiku should then come in and take over. We did what we should do. But there were a lot of rigging and inflation of votes; like in Borno State that her people have been dislodged from their places producing unbelievably higher votes than states that are stable; and Yobe State producing votes higher than accredited voters.

“When the party went to court, Atiku abandoned everybody and disappeared to Dubai. People didn’t even ask him the reason he disappeared. It was as if he was not interested in taking back his mandate. Today, he is the one saying this, because he thinks it is birthright. I don’t want to talk too much. Nigerians will give him the deserving response.”

Meanwhile, The Pan Niger Delta Forum (PANDEF) also described the position of Atiku that zoning is not provided for in the 1999 Constitution as unfortunate and disappointing.

The group described Atiku’s position as a mockery of the nation’s constitution, which preaches equity, fairness, and inclusiveness.

It reiterated the call on all registered political parties to field southern candidates for the 2023 general election so as to have the support of the group.

ALSO READ THIS:  I Have No Anointed Candidate For 2023, Stop Using My Name — Gov Bello Warns APC Aspirants

National Publicity Secretary of PANDEF, Hon. Ken Robinson, said that his group was disappointed at the statement credited to Atiku on the zoning of the presidency.

He said: “It is rather unfortunate that the former vice president drew such a conclusion. He knows his statement is inconsistent with established and justifiable protocols and conventions, which have helped to sustain considerable understanding, peace and stability in the polity.”

According to him, the narrative that there is no zoning in the nation’s constitution is a conscienceless mockery of Nigeria’s democratic evolution, and indeed, the country’s constitution.

“It bears underscoring that Nigeria’s Constitution, though flawed, has ample provisions that emphasise inclusiveness, fairness and equity.

“Section 14(3) of the Constitution (as amended) provides that ‘the composition of the Government of the Federation or any of its agencies and the conduct of its affairs shall be carried out in such a manner as to reflect the federal character of Nigeria and the need to promote national unity, and also to command national loyalty, thereby ensuring that there shall be no predominance of persons from a few states or from a few ethnic or other sectional groups in that government or any of its agencies.” The intent and purpose of this section are precise and explicit.”

Robinson further stated that zoning and rotation of key political positions in the polity cannot be discarded in a diverse and complex society like Nigeria, particularly, under the prevailing circumstances.

He advised Atiku and other northerners interested in succeeding President Muhammadu Buhari in 2023 to forget such idea, adding that it cannot stand the test of time.

The organization said it was unthinkable that the former vice president who had benefited from zoning in his political contests over the years would suddenly kick against same.

National Publicity Secretary of Ohanaeze Ndigbo, Chief Alex Chiedozie Ogbonnia noted that having enjoyed tremendous support of Ndigbo over the years, Atiku should use the 2023 presidency to reciprocate the gesture.

“In the first place, Atiku has been involved in the politics of this country for about 30 years, from SDP, and several other parties.

“He understands the politics of Nigeria. We are surprised at his position. PDP has been using zoning as a strategy for winning elections in the past. He should realize that Igbos have always supported him even four years ago. If there are any people he should show support, it should be Igbos,” he stated.

He further noted that Atiku should not allow his presidential ambition to becloud his sense of reasoning.

“We are completely disappointed that he is making this kind of comment. Atiku knows the truth and should not allow his ambitions to lead him to abandon all he once stood for.

“We used to know him as a man that supports justice, fairness, and equity; let him not deviate from this because it will be so unfortunate and sad,” Ogbonnia added.