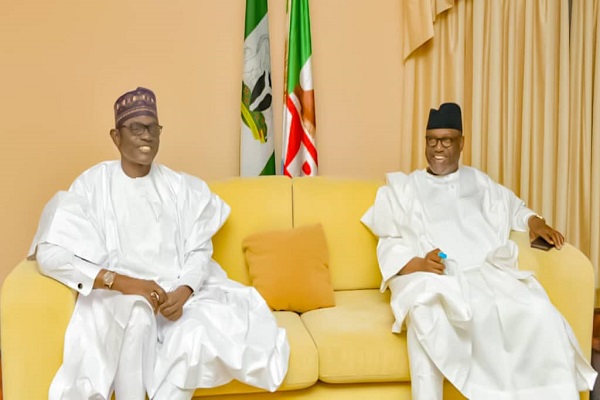 The Chairman of the Caretaker/Extraordinary Convention Planning Committee (CECPC) of the ruling All Progressives Congress (APC), Governor Mai Mala Buni on Thursday met with the Sani Bello-led committee who stood in while he was on medical vacation.

Buni returned on Wednesday night after a medical trip to UAE and a
meeting with President Muhammadu Buhari in London over the leadership crisis rocking the party.

The meeting, which took place at Yobe State Governors’ Lodge in Asokoro, attracted all members of the caretaker except the sSecretary, Senator John James Akpanudoedehe.

It was gathered the Yobe Governor met with chairman of the Progressive Governors Forum (PGF) Governor Abubakar Atiku Bagudu where he was briefed on the outcome of the forum’s meeting on Wednesday night.

Sources close to the CECPC said the Sani Bello-led team met at the Niger Governor’s Lodge, which is a stone throw to Yobe’s before proceeding to Yobe Lodge with other members of the committee.

Gov. Sani Bello acted as the chairman when Buni was away.