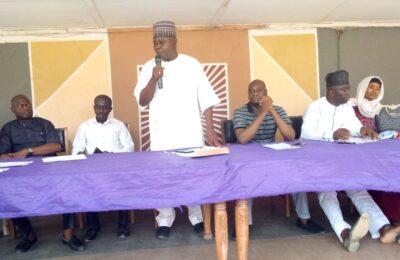 The New Nigeria Peoples Party, (NNPP) in Kogi State says it is ready to receive some groups who plan to join its fold in order to join forces for the success of the opposition party in the 2023 general elections.

Kogi State Chairman of the NNPP,
Alhaji Ahmadu Abdullahi Usman,
stated this on Monday while addressing reporters at the party secretariat in Lokoja, the state capital.

Although he did not disclose the groups planning to join the NNPP, but stated that they were critical to the party’s success just as the party was important to them.

Usman hinted that some of them were aggrieved members of the All Progressives Congress (APC) in Kogi planning to exit the ruling party.

The NNPP Chairman assured intending new members that the NNPP and its supporters would accept them in good faith.

He also advised them to come into the party with renewed vigour in order to move the party forward together and position it to claim power in the coming elections.

“We, agreed that anybody that wishes to enter or join the NNPP, we are ready to accept them with good faith and they should also come with same, then we should join hands together and move NNPP forward in Kogi State.”

Usman urged them to follow the right procedure to join the NNPP from the ward to local government and state levels, saying that became necessary to avoid any problems with their membership in the future.

He said the NNPP needed them and they also needed the party and as a result, both sides have become important to one another.

The NNPP Chairman, however, warned that the party would not tolerate anyone coming with the intention to destabilise its camp in the state.