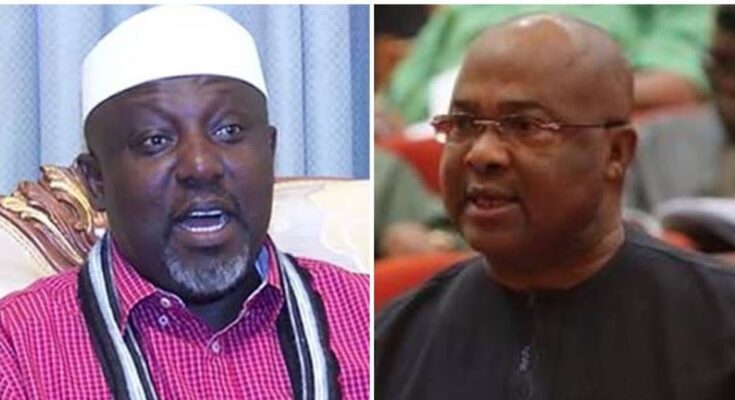 The All Progressives Congress, APC, in Imo State has advised Senator Rochas Okorocha to desist from tarnishing the image of Governor Hope Uzodimma with false claims and crocodile tears, aimed at securing the sympathy of Nigerians.

The ruling party led by Macdonald Ebere said,” As a party, we advise Rochas Okorocha to refrain from his trite shenanigans and doomed efforts to link Senator Hope Uzodimma with his self-imposed and merited predicament.”

The party made the assertions in a statement signed by APC’s publicity secretary in the state, Cajetan Duke, on Monday.

It said that for too long, Rochas Okorocha held Imo to ransom with the false belief that the entire State was his personal estate. The rhythm has changed and his chickens have come home to roost, APC opined.

APC said Uche Nwosu being his son-in-law, does not confer on him any immunity from arrest and prosecution as marrying the daughter of a former governor is not an immunity of any kind.

The statement read, “As a party, we advise Rochas Okorocha to refrain from his trite shenanigans and doomed efforts to link Distinguished Senator Hope Uzodimma with his self-imposed and merited predicament.

“The APC is aware that the law is not a respecter of any individual as nobody is above it.

“It is equally true that refusal to honour genuine and lawful police invitation will warrant forceful arrest to bring the individual to book.”

APC commended Uzodimma for his mature disposition in the face of rash provocations and rascality from persons intentionally working against the overall.