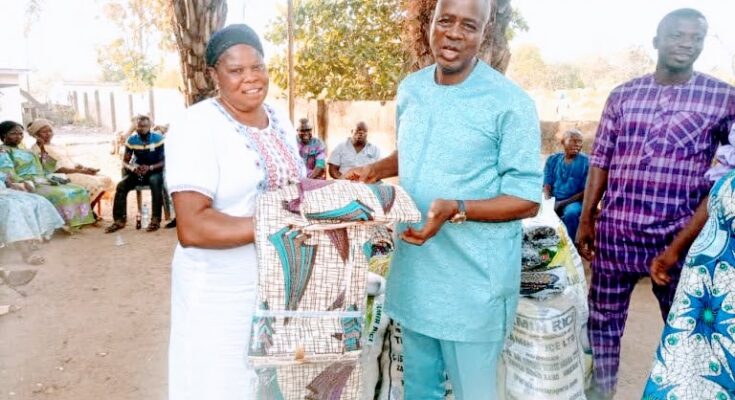 In the spirit of the season for celebration and togetherness, the Kogi State Security Adviser, Commander Duro Jerry Omodara(Rtd) has on the 26th December, 2021, hosted the Kabba Bunu Local Government Area chapter of the All Progressives Congress, APC, stakeholders to a dinner party at his country home in Oke Offin.

Speaking at the gathering, Omodara
said he had chosen to celebrate with the Party’s stakeholders because they have been supportive to Governor Yahaya Bello’s administration and his humble self, adding that at a festive period of this nature, that it is necessary to thank God and those who play vital role for the good governance of the state.

Addressing the stakeholders, which included the APC chairman, Mr. Solomon Jemibawondo, ward chairmen, women leaders, local government Excos, councillors and other party cheiftains, the Security Adviser said he was satisfied with the level of support he gets from his people, thus his resolve to appreciate them at Christmas.

“As members of a political class, that have been working harmoniously to build our great party, the APC to an enviable position, I deemed it necessary for us to come together to chat and share love, which is the spirit of the festival.

“This is really to appreciate you on the way and manner we have been working together to support the Governor of Kogi State, Yahaya Bello and my humble self that is serving the governor”, he said.

The Security Adviser who distributed over 100 hundred bags of rice to the party’s stakeholders, friends and well-wishers, pledged to appreciate the people more as they continue to show solidarity and support to the party, stressing that Christmas is a moment of joy with the loved ones.

He thanked Governor Bello for transforming Kogi state and described him as enthusiastic, committed, development oriented, a true son of the soil, an ambassador of peace and epitome of good governance.

According to him, the Governor has broken the jinx of ineptitude in governance and has at the same time become a shining example as the only Governor in the country, whose State enjoys high level of peace and security, resulting to the accommodation of people from diverse culture and religion.

He therefore solicited from his people to always throw their weight on Governor Bello as he has re-defined democracy as truly the government of the masses.

The APC chairman and the Council Leader, commended Omodara for his magnanimity to identify with his people in a festive period as Christmas.

They added that the security expert remains outstanding government officia that has continuously being having the feelings of his people.

While urging him to continue with his kind gesture and community services, they also thanked Governor Bello for appointing Kabba Bunu sons and daughters into his cabinet.

The duo who spoke on behalf of the party stakeholders pledged their unalloyed support to Governor Bello and Omodara.