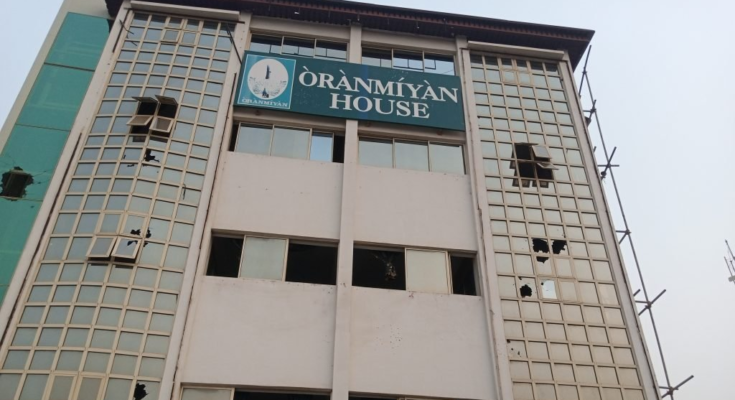 More facts have emerged on how armed men attacked the Oranmiyan House Campaign office of Rauf Aregbesola, the immediate past governor of Osun State and current Minister of Interior.

The yet to be identified armed men had stormed the Aregbesola campaign office, located on the Gbongan-Ibadan road in Osogbo on Thursday evening.

Speaking in a radio current affairs programme monitored by NationalWatch on Friday in Osogbo, the Director-General, Oranmiyan Worldwide, Olajide Sodiq revealed that the armed men, numbered about 5 came in a wine coloured Sienna bus and shot at the transformer outside the building with the aim of setting it on fire.

Olajide said the armed men had soaked loaves of bread in petrol, lit them and tossed them into the building but for the quick intervention of people who were inside, the building could have been set ablaze.

“After the attack, we reported the incident at the Ataoja Police Station but we were told to lodge a formal complaint at the Oka-Baale Area Command, Osogbo.

“This we did. They came for us after the meeting of The Osun Progressives which holds at the Oranmiyan House.”

The Oranmiyan Worldwide DG also accused Governor Adegboyega Oyetola and his group, IleriOluwa of being the brain behind all the attacks against TOP in the state in the last 7 months.

His word, “We have filed several complaints that the lives of members of The Osun Progressives are no longer safe in the state and we call on the state government to address the issue before it gets out of hand.

“The state government should not wait until the matter gets out of hand and lives are lost before it will act. When such happens, it will not be well.”

Meanwhile, the Special Adviser to Governor Oyetola on Politics has described the incident as unfortunate and uncalled for.

Akere who absolved himself from the attack also called on the Nigeria Police to do their job.

The Special Adviser who maintained that members of The Osun Progressives were their friends urged all warring parties to settle their differences amicably.

While describing those behind the attack as fifth columnists, he added that the state governor, Adegboyega Oyetola has no knowledge of the identities of the perpetrators of the attack.

This recent attack is coming on the heels of an altercation in Ikirun on Tuesday where members of The Osun Progressives and the Caretaker Chairman of Ifelodun local government were involved in a free for all fight.

The Osun Progressives after the incident also alleged that their members were indiscriminately abducted in the middle of the night.

State commands of the Nigeria Police and the Nigerian Security and Civil Defence Corps have since condemned the attack on the campaign office and promised that the perpetrators would be brought to book.

On Wednesday, February 3, 2021, 5 members of The Osun Progressives were remanded in custody after they were arraigned before an Osun High Court in Ikirun.

Also, a Federal High Court in Osogbo had on Wednesday dismissed a suit brought before it by the Rasaq Salinsile faction of the APC in Osun seeking to nullify the ward congress of the party.

The suit which was dismissed by Justice Emmanuel Ayoola was on the premise that the court lacked jurisdiction to adjudicate on such a matter since it was a party affair.