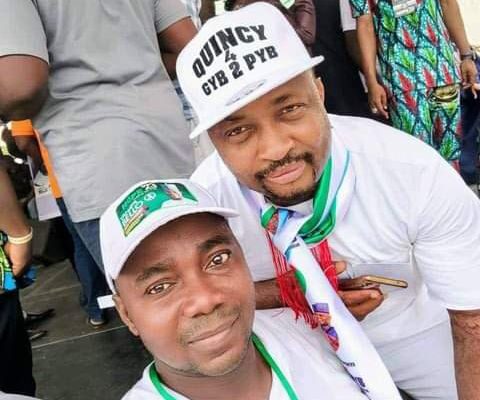 A Lokoja 1 State Constituency aspirant on the platform of the All Progressives Congress, APC, Hon. Adams Danfulani Bakaso a.k.a Quincy, on Thursday stepped down for Hon. Shehu Tijjani Ebaiya of the ruling APC.

According to Danfulani, he took the decision to drop his ambition and support Mr. Shehu Tijjani Ebaiya after a meeting with him at his Lokoja GRA residence.

The meeting with Danfulani, which was supposed to hold Wednesday night, dragged into the early hours of Thursday as Ebaiya who is one of the coordinators of Governor Yahaya Bello Presidential campaign organization was busy attending other political meetings at the Government House.

Danfulani said he had taken the decision to shelve his ambition after a careful assessment of the situation in Lokoja 1 State Constituency and how Ebaiya had managed his affairs especially his struggle to ensure the Governor gets the APC Presidential ticket.

ALSO READ THIS:  Why I want To Represent My Constituency – Hon. Mohammed Shaba

“There is no point changing a winning horse”, said Danfulani.

“When I stepped up to answer the call of our teeming supporters to contest the house of assembly seat of our dear Constituency, I had the welfare of our people and development of the area at heart. But I later realised that there was no use fighting over the seat when Ebaiya also has all that I desired for Lokoja 1, and has even better plans for the future of our beloved Constituency.

“It was on that note that I went to him as a brother to formally assure him that rather than contesting against him, I will mobilise all my supporters to ensure that he wins the election. I hereby step down for him.”

Ebaiya, who was pleased with the development, described the aspirant’ action as “an act of statesmanship worthy of commendation”.

He assured him that he will continue to strive for a better deal for the people of Lokoja 1 State Constituency.

Decision of a Comrade is for the sake of Brotherhood

I, Hon Adams Danfulani Bakaso (Quincy) wish to notify the general public of my intention to stepdown from the race to represent the good people of lokoja | constituency at the State Assembly, to my brother Bin-Ebaiya Shehu Tijani (BEST) in the fourtcoming election 2023, under our great party APC.

My decision is borne out of the spirit of Comradeship and respect for the leadership of our great party.

I wish to use this opportunity to thank H.E Alh Yahaya Bello (Presidential hopeful) and his Chief of Staff, Pharm Abdulkareem Jamiu Asuku for all the opportunity giving to me to serve under his leadership.

I also wish to thank and appreciate my friends, supporters and well-wishers for the overwhelming support enjoyed from them.

Most importantly to pledge my unalloyed loyalty to the party and also promise to do all within my power to ensure victory for the APC across all levels in the state.

I am forever greatful. Thank you!