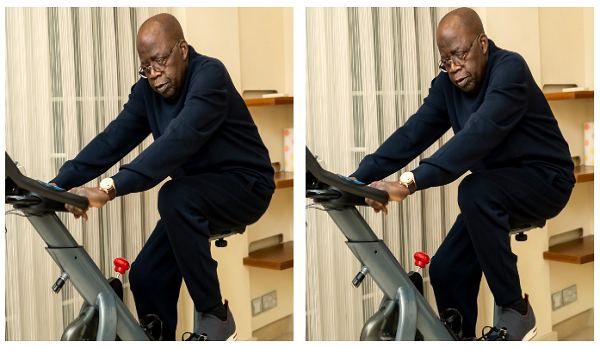 I am Hale, Hearty, Says Tinubu

He dispelled the rumour of death and withdrawal from the 2023 race.

The eminent politician said those making false claims about him evaded reality.

Exuding confidence, the standard bearer, who was spotted on an exercise bike in a video that went  viral, declared that he was strong, healthy and ready to serve.

For some time now, detractors have always peddled rumours about the former Lagos State governor’s health anytime he was out of the country.

ALSO READ THIS:  Breaking: Alaafin, Ooni Meet Aregbesola To reconcile Him With Tinubu

However, in his twitter handle, Tinubu said their rumours and falsehoods about his heath and fitness were a figment of hyperactive imagination.

He wrote: “Many have said I have died. Others claim I have withdrawn from the presidential campaign. Well…Nope.

“This is the reality. I am strong. I am healthy and I am ready to serve Nigeria from day one.”

There were thousands of comments and retweets of the post by Tinubu.

Chairperson of the Nigerians in Diaspora Commission (NiDCOM), Abike Dabiri-Erewa, tweeted: “On your mandate we shall stand.”

Special Assistant to President Buhari on Digital Communications, Bashir Ahmed, tweeted: “See how a seven-second video is driving them crazy. It is expected to feel that way.

“But at the moment, we can only ask you to calm down because more and hotter videos are on their way. #BAT2023”