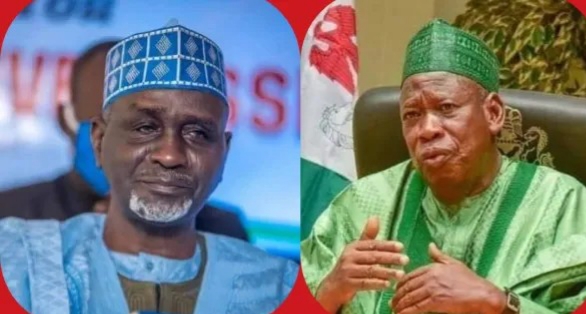 By Amuda Dan Sulaiman Fab
A High Court sitting in the Federal Capital Territory (FCT) has reaffirmed the sack of the executive of a faction of the All Progressive Congress (APC) in Kano State loyal to Governor Abdullahi Ganduje.

The court had on 30 November sacked the APC factional exco loyal to Mr Ganduje and declared the one loyal to Ibrahim Shekarau as validly elected.

The court presided over by Justice Hamza Muazu dismissed a motion by the faction challenging its earlier judgement and fined it N1 million for filing what the court called a frivolous and time-wasting motion.

Friday’s judgement was delivered after the Ganduje faction filed a motion asking the court to stay proceeding and set aside its decision which nullified Abdullahi Abbas-led executives.

Two factions of the party in the state had conducted parallel congresses on October 18 but the party headquarters endorsed the one conducted by the loyalists of Mr Ganduje.

However, the court ruled that the faction loyal to Ibrahim Shekarau, the senator representing Kano Central, had conducted ward and local government congresses in the state, hence remained valid and that it had the authority to elect the state executives.

Muhammad Chola and 73 others had approached the court by an originating summons through their counsel, Nureini Jimoh, (SAN), seeking the validation of the local government congresses of the party conducted on September 17 in the 44 local government areas of the state which returned 1,319 winners.
Chola and the claimants, who are believed to be loyal to former governor, Ibrahim Shekarau, and member of the House of Representative, Sha’aban Ibrahim Sharada faction also supports the recognition of the ward congresses of July 31 which produced 17,908 winners.

The Shekarau faction had elected Haruna Danzago as chairman while Mr Ganduje’s camp elected Abdullahi Abbas. Mal. Shekarau is the leader of the G7 group.