Home Politics You Are The Next President, Ondo Monarchs Tell Tinubu 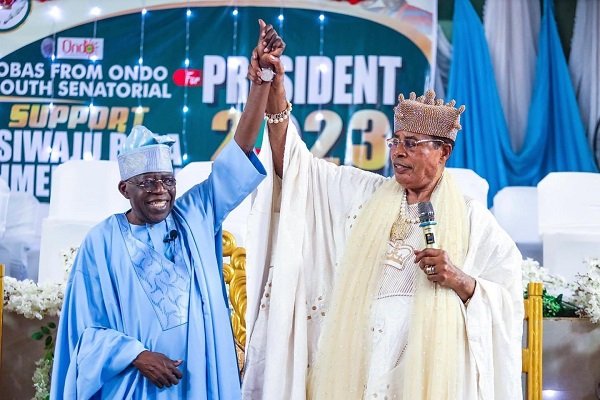 You Are The Next President, Ondo Monarchs Tell Tinubu

Traditional rulers in Ondo State have promised to work towards the  emergence of former Lagos State governor, Asiwaju Bola Tinubu, as President of Nigeria.

The monarchs said Tinubu’s antecedent stood him out as the next person to take Nigeria to the place of her dream.

They spoke separately when Tinubu visited traditional rulers in the three senatorial districts of the state.

Oba Fredrick Obateru-Akinruntan, the Olugbo of Ugboland, who spoke at Okitipupa, headquarters of Okitipupa Local Government, said Tinubu has the charisma and ability to turn the country’s fortune around.

He said all traditional rulers in Ondo South have blessed and endorsed him for the number one job.

Oba Aladetoyinbo described Tinubu as a maker of men even those he rarely knew.

He said the prayers of the obas in Ondo Central Senatorial District would ensure Tinubu becomes  the next president.

On his part, Tinubu informed the monarchs that he was running for the presidency because he is seriously bothered about the development of Nigeria.

He said he knew the problem of the country and if given the opportunity, Nigeria would be ranked among the best nations in the world.

“I don’t run away from battle. I am very particular and passionate about democracy. During MKO’s  time, we tried but we could not get it. When they came to meet us to support Buhari, we sought  your support  and Buhari became the president.

“I have gone to inform Buhari that I want to contest, particularly now that it is remaining few months for him. It is not a matter of fight, the constitution stipulated it. Buhari told me to go ahead and declare.

“I informed Buhari so that people would not say who did I inform before taking the decision. I am the most qualified to become the president. I will ensure that our children get employed, there will be industries and all- round development across the country.

“Ondo State is abundant in natural resources and Akeredolu is really trying. The job of a president is all about the brain and I have it. Inform everyone that I want to contest. I will make Nigeria to be more developed than Lagos.

“It is a pity that ordinary brake pads Nigeria cannot produce. I will turn Nigeria around for good. All I seek are your prayers and support for me to become the president. It is your son that wants to contest and I’m that your son.

ALSO READ THIS:  Kogi Assembly: Why I want To Represent My Constituency – Abdulrahman

“Lagos State was the worst state in Africa when I became governor. We were generating megre revenue then but we did our best then. Look at Lagos now, it generates over N40 billion in revenue

“Division is one of the problems in Nigeria too but there is no division in Lagos because any tribe or religion is welcome as they can contest and win elections and that is why Lagos is thriving.

“I am here to seek the blessing of our royal fathers for my presidential ambition because I know where the problems are and if given the opportunity in 2023, Nigeria will be ranked among the best nations in the world.

“I am imploring all eligible voters to get their Permanent Voters Card (PVC) revalidated for them to exercise their civic responsibilities,” Tinubu said.